The star of the show: spent grain, courtesy of the Brooklyn Brewery

And the supporting cast: 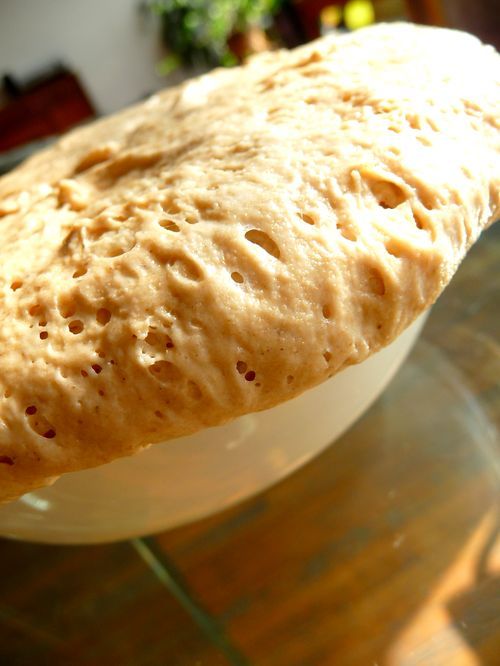 Let's give them a big round of applause.

Ok, so I must be the last schmuck sporting a cold mid-June. Which means a) I grumble (je ronchonne) and b) I bake. This, combined with the discovery of Peter Reinhart's Whole Grain Breads

was the open door to endless hours of grumbling baking. Hooray.

I started with the Anadama bread (good, good, and easy too), to get the gist of it (histoire de prendre le coup) - the delayed fermentation, the joys of enzyme activity and the such - and then moved on to a project which I felt had tons of potential. How about incorporating spent grain, that is, the leftover mashed grain (husks and all)  produced by breweries, in bread dough? That sounded like genius, and much more importantly, it tastes like genius.

First things first, with the kind help of Ben Hudson, from the neighbouring Brooklyn Brewery, I got myself a tubful of spent grain, which a bearded friend of Ben's identified as the leftover barley malts from a Pilsner brew. Ben, Bearded Friend, thank you very much. A spent-grain loaf is coming your way, along with my gratitude.

On the first day, make the soaker by combining thoroughly 227g whole wheat flour, 1/2tsp salt, and 170ml water. Leave it at room temp for 12 to 24 hours, or in the fridge for longer. Make the biga by mixing 227g whole wheat flour, 1/4 tsp instant yeast, and 170g water. Knead (with wet hands) for two minutes, let the dough rest 5 minutes, knead for another minute. Cover with cling film, and refrigerate for at least 8 hours.

On the second day, take the biga out of the fridge two hours before mixing the final dough. Chop the soaker and the biga in tiny pieces, and add those to 113g spent grain, 156g whole wheat flour (I needed more than Peter Reinhart to achieve a kneadable consistency - he only uses 56g), a heaped 1/2tsp salt, 2 1/4tsp instant yeast, 3tbsp agave syrup, 1tbsp vegetable oil. Knead 2 minutes with wet hands, until everything is evenly incorporated. Knead for an extra 4 minutes until you get a soft and tacky (but not sticky) dough. Let it rest 5 minutes while you prepare a lightly oiled bowl. Resume kneading 1 minute, and put the ball of dough in the bowl. Let rise at room temp about 60 minutes. Shape it freestanding or in a loaf pan, and let it rise for another hour.

Preheat the oven to 425°F, put the bread in and turn the temp down to 350°F. Bake 20 minutes, rotate the loafs, bake 20 to 30 more minutes. Let it cool on a cooling rack at least an hour before slicing into it. 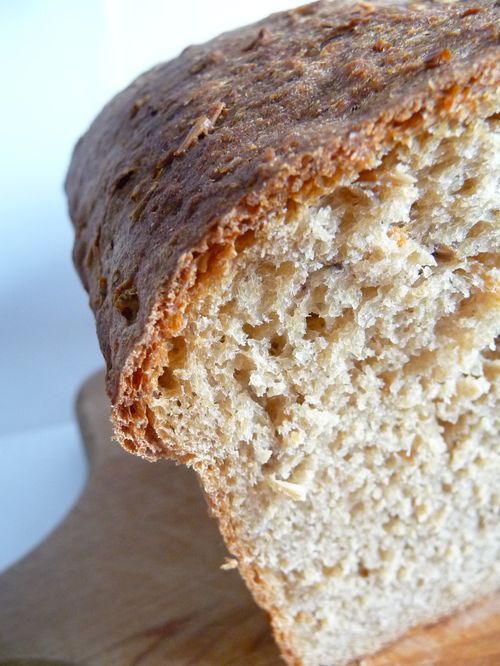 The smell coming out the crust while still warm is amazing - caramel with malted overtones. The crust itself is very hard when it comes out of the oven, but softens as the bread cools and the moisture redistributes. This bread doesn't need to be toasted and although it is 100% whole wheat, it has no bitterness whatsoever, which results partly from early enzyme activity (I started my soaker and biga two days ahead instead of one), and from the addition of agave syrup.The inside of the bread is soft and pillowy, with just the right hint of chewiness. All of my tasters were pretty happy, I'd say.

Thanks again to Brooklyn Brewery for being such good sports!